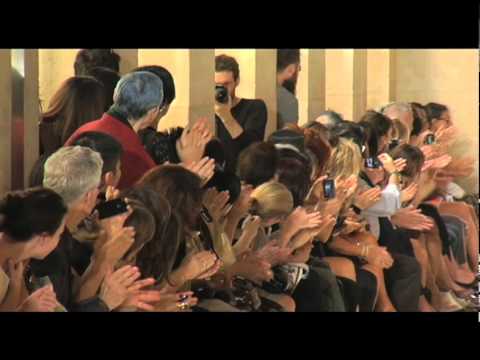 “Fashion Week with Daria Shapovalova” continues to reveal the whole diversity of world’s major fashion capitals. Series of documentaries is dedicated to the style of New York, London, Milan and Paris. ‘Fashion Week’ helps each viewer to feel oneself behind the scenes of modern fashion world. TV-host and organizer of Mercedes Benz Kiev Fashion DaysDaria Shapovalova introduces viewers to the most fashionable citizens, famous designers, studios and workshops.

In the second part of the documentary about Paris, Daria Shapovalova tells the story of designer Alber Elbaz and one of the last native French designers in Paris – Jean-Charles de Castelbajac. You will find out some tips for young designers from editor-in-chief of Italian Vogue Franca Sozzani and founder of Browns Boutiqe Joan Burstein. In addition, prominent fashion critic Sarah Mower will introduce her own initiative “London Showrooms”, which enables young British designers to present their clothes for buyers in Paris.
You’ll see an exclusive report from the oldest bookshop in Europe, Galignani store.
Daria will also explain the reason why everybody in Paris is so found of Carine Roitfeld and not so much of Carla Bruni-Sarkozy. Watching documentary till the very end, you will discover all the secrets of Parisian chick and allure of French woman.